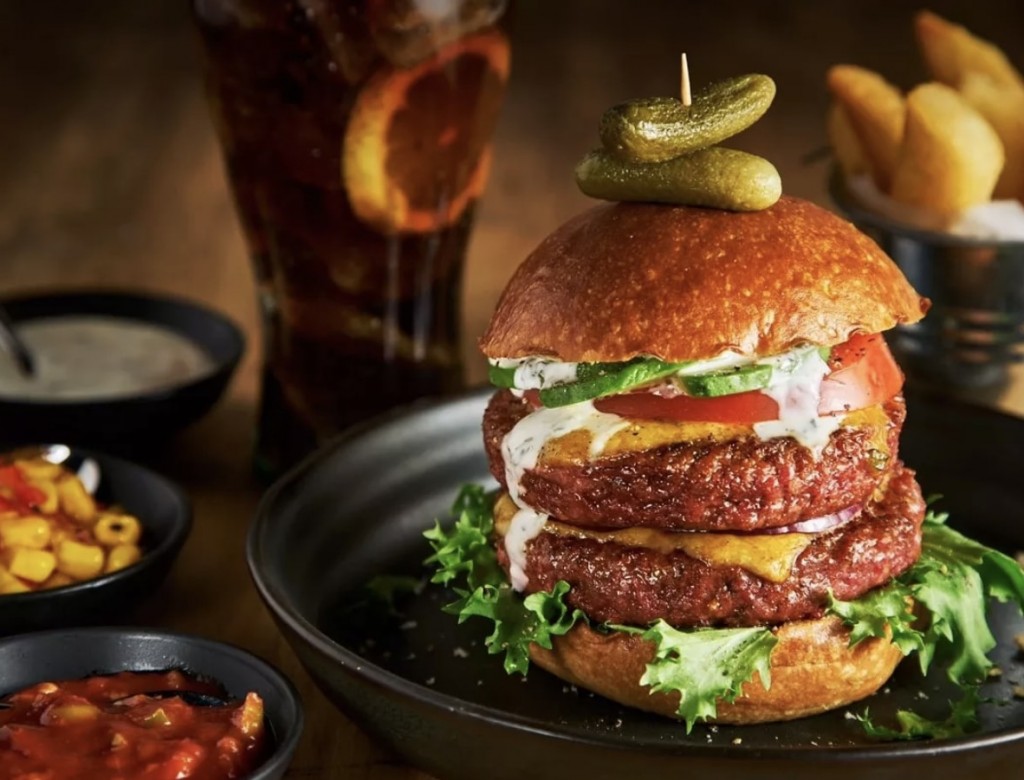 Tempted to try the new generation of vegan burgers that taste, look and ‘bleed’ like real meat?

These futuristic foods are gradually making their way into the UK scene, and are being trialled now in a selection of forward-looking London restaurants. They’re still not easy to find, and availability is currently limited. But keep an eye on this page for new additions to the fake meat scene – we’ll update as we find more.

Because our food safety laws are stricter than American ones, we can’t yet try the scientifically advanced Impossible Burger this side of the pond, so homegrown start-up Moving Mountains has risen to the challenge of creating a realistic non-meat meaty burger that doesn’t use any new-fangled scientific wizardry, but still tastes as satisfying as real meat.

The result is their ‘B12 Burger’, and you can try it at Maxwell’s Bar and Grill and the Dirty Bones restaurants in London (details below). B12 burgers have a deceptively carnivorous texture, and are a welcome addition to the menus at these favourite American food eateries.

Does it bleed? Yes, but with beetroot juice – one of the key ingredients in the protein packed patty.

Beyond Meat at Honest Burger, Kings Cross
One of the few US fake meat brands that has made it successfully to UK shores is Beyond Meat, whose patties have just been made available at Honest Burger in Kings Cross. As of 10th July, you can sink your teeth into one of their juicy burgers with a portion of fries, vegan cheese and vegan mayo for the down-to-earth price of £10.95.

What’s great about Honest Burgers’ decision to sell the fake-meat burgers alongside the real thing is how easy it makes a visit here when you’re out with a bunch of friends with different tastes and dietary needs – it’s just another option among their existing range of burgers.

For those wanting to cook their own vegan fast food at home, selected products from the Beyond Meat range will be coming to Tesco stores later in 2018.