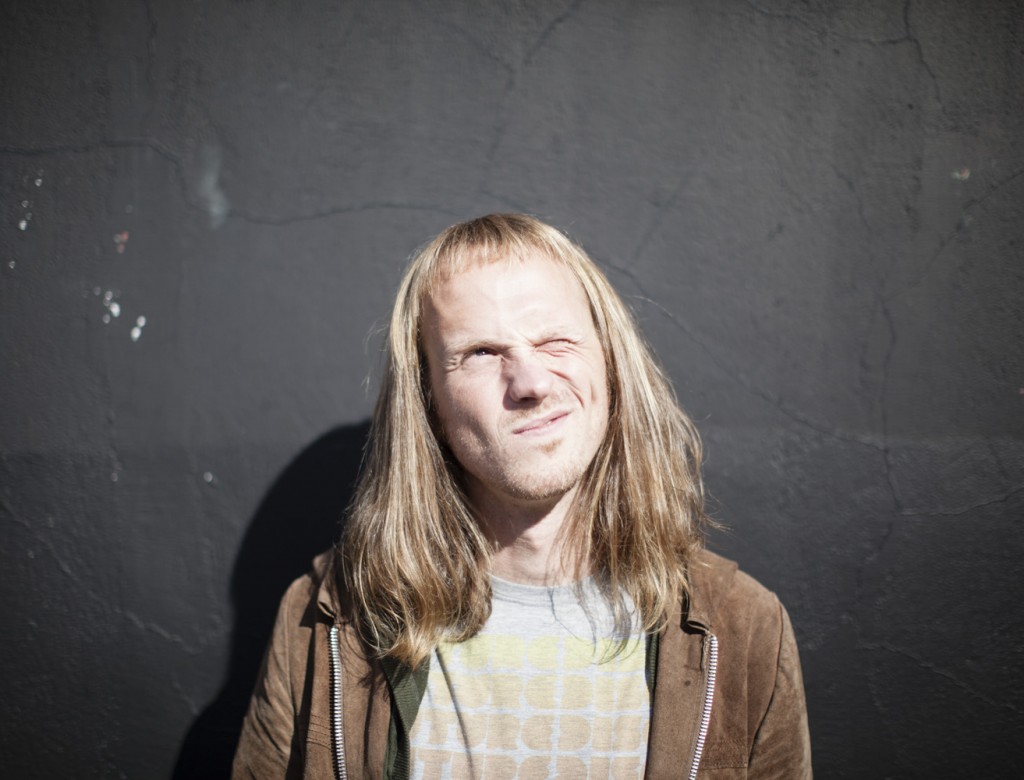 First and foremost, producer and music man TYTHE is a super nice guy. The kind of guy that smiles at the sun with a happy squint. He’s also just released his Balearic-drenched debut album, ‘And Also With You‘ on Sunday Best this week. The album’s been scoring consistently highly across the music press – Clash Mag called it “One of the most confident albums of the summer 9/10″. Q called it “lush”. UNCUT called it “Lavish” and MOJO called it “Razor-sharp 4/5″. So Josh Jones caught him outside Brixton tube stop and asked him the following questions.

Hello TYTHE, how’s it going? Up to much?
Yeah man, at the moment I’m mostly wigging out over the amount of giant spiders that are native to the downstairs toilet of the new house I’m living in, in the South Downs. Arachnophobia 2: They Watch You While You Wee. I’m doing that and also trying to squeeze every last drop of ecstasy out of the release of my debut LP this week.

Aha yes, your album just came out this week – are you reeling from a drug and drink laced typhoon of a celebration or did you decide to have a cup of tea and get on with things?
Dude, I spent the day on my own. It started off pretty low-key as I didn’t have any hardcore drugs on my desk, but instead I DID discover a clever combination of extra strength coffee and Maca powder… oh yeah. Never before has caffeine been so incredibly healthy and noble. I was absolutely flying man. I might start up a stall at festivals actually. And call it Clever Coffee. I think that will be pretty straight-forward for people. Start with the name and just wade in. You’ve got to be naked though. That’s part of the Clever © experience.

You’re from that bit of Essex where London merges into the fields. Did you spend your childhood driving about in a small car blasting out garage music?
Garage was a guilty pleasure for me, reserved strictly for 17th birthday parties at wooden rugby clubs. We instead drove around playing ‘Wind It Up’ by the Prodigy in my friend Paul’s sky blue Fiat Cinquecento. And probably ‘One Armed Scissor’ by At The Drive-In, going through the McDonalds drive through. Either way it was both obnoxious and completely inane at the same time; a dichotomy at the very heart of the Essex ethos.

What’s the most technical bit of technical equipment you used on the album?
Some little handheld recorder thing to capture the tragedy of Walton-on-the-Naze. Oh… and a music-box, you know the little mechanical things you put on a hard surface, turn the tiny arm and it plays a plinky-plonky nursery rhyme?

I know it. Why TYTHE?
Well I wanted one word. Something unique. Fantastical. Open. And something imbued with a strange sense of history and esoteric value. A tall order.
I originally wanted to call it TITHE, as in the slightly antique 10% of your earnings that you have to give to your church as religious tax – which as a general metaphor is just mega, for me. But the label vetoed it, saying I’d attract all sorts of evangelical Christian Rock fans. I was like ‘Yeah! I know. Amazing!’ But it didn’t wash. So after much deliberation, I changed a letter… and it slipped through unnoticed. Fortunately, I’d thought far enough outside the box.

What’s next for you?
Man, it’s taken me so long to get this album finished to a standard where I could finally ‘let go’, I dread to think that there might be a difficult-second-album on the cards. I’ve been astounded at the positive reception that ‘And Also With You’ has been receiving in the music press, so I owe it to myself and to my ace label Sunday Best to try to play these songs live – starting at Bestival this year – and let the record permeate through into people’s collective consciousness a bit over the coming months. I’ve been assembling a wonderfully talented band, including my singer-songwriter brother Chris Peck, singer-songwriter Susannah Austin [whose mum wrote this tune] and percussionist Ric Elsworth. I definitely want to DJ more too.
One step at a time. So far, Phase One of my masterplan to write music for Mick Hucknall is going according to schedule… Phase Two will be writing the hit jingle for the next Bodyform advert. After that, I will truly be a force to be reckoned with in the Easy Listening game.

Please check out my album ‘And Also With You‘ if you get a chance.
Thank you x