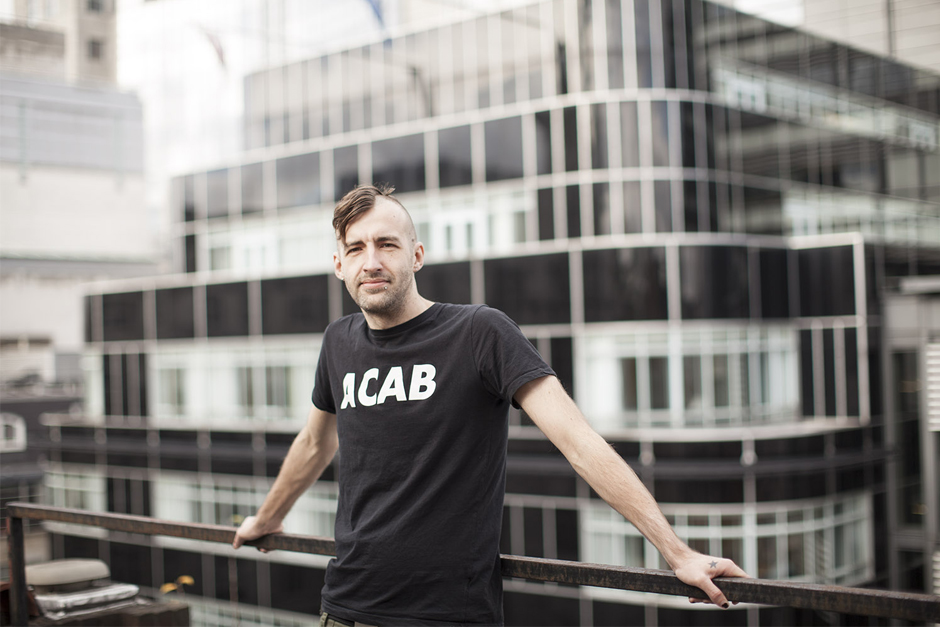 An old friend of le cool, Vyvian Raoul is editor of Dog Section Press and is currently putting together a new book called Advertising Shits In Your Head. As soon as we heard that we had to find out more…

That’s a bold title for a book, Viv – where’s it from?
It’s actually borrowed from a bit of graffiti I saw on Brick Lane when I was drunk one time that seemed more profound than it probably was: money shits in your head. That’s also a really good description of what advertising does to you, so I switched it up. It started out as the title of a STRIKE! Magazine article by Bill Posters of Brandalism that was about the psychology of how advertising and the industry around it works, and then it became the title for the book.

What’s the project all about? It’s being crowdfunded right?
The book is about the modern subvertising movement and its motivations. The full title is Advertising Shits In Your Head: Strategies for Resistance. The first part explains subvertisers’ objections to advertising – the various ways it shits in your head – and the second looks at three subvertising case studies – Public Ad Campaign, Brandalism and Special Patrol Group – what they’ve done to try and counter it, and how they’ve attempted to spread the movement. And, yep, we’re currently crowdfunding for the printing costs of the book. Dog Section Press is a not-for-profit publisher, so crowdfunding makes sense for this sort of project. A lot of the rewards for backing the campaign are guides and tools for subvertising, so if you don’t like having your head shat in by advertising you can both help us get the book printed and start your own subvertising campaigns.

Are you those guys that go around replacing adverts and had a stall at Dismaland?
Ah, I think you mean Special Patrol Group – they’re featured in the book. I was at Dismaland as part of STRIKE! Magazine: we were running an anarchist newsstand called No Borders. Special Patrol Group were also there giving tutorials on how to hack bus stop advertising spaces – as the book describes, something that sets the modern subvertising movement apart is its attempt to spread the form, so that everyone (with an Allen key) can take direct action. Special Patrol Group actually started out by putting designs we’d done in the newspaper (notoriously the Total Propaganda campaign and quotations from David Graeber’s Bullshit Jobs article) in outdoor advertising spaces, but their identity remains a mystery.

And they’re running a workshop explaining how to subvert advertising, right?
That’s right, an Ad Hack Workshop. They’ve installed a bus stop advertising cabinet – one of Clear Channel’s – at DIY Space For London off the Old Kent Road, and are using it for training purposes. There’ll be a short introduction on the ills of advertising, a bit of subvertising theory (it’s a form of culture jamming/detournment that has its roots in the Situationist International) and then also practical instruction. Plus they’ve created an Ad Space Hack Pack, so you can take home the tools for your subvertising campaign. That said, I think they’d be the first to say: you don’t really need training, you should probably just do it.

What’s your most despised type of advertising: billboards on the street, on TV or YouTube pre-roll ads?
Honestly, they’re all so bad for you! But, if you had to make me choose one, I’d say outdoor – or out-of-home – advertising. At least with TV or internet advertising there’s some degree of control, but nobody has any choice whether they view outdoor advertising or not. The SPG have produced an Ad Hack Manifesto, and the third point is that the visual realm is a public realm – it belongs to everyone, so no-one should be able to own it. Currently, whoever’s got the most cash can literally write their name across things that are supposed to belong to everyone. The final manifesto point is that outdoor advertising can and should be banned (it was banned in Sao Paulo in 2007 and Grenoble in 2015 because of its harmful affects). If we woke up tomorrow morning and all the ads on the way to work had suddenly disappeared – or been replaced with art – I don’t think anyone, with the possible exception of advertising executives, would complain, would they?