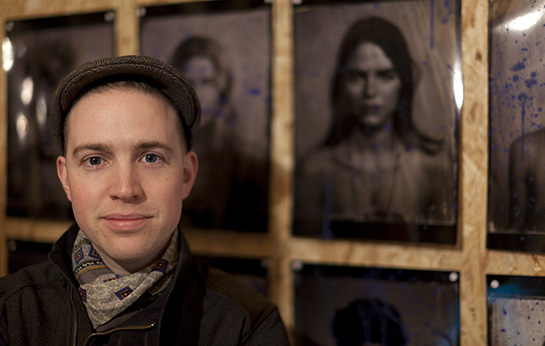 Walter Hugo is a properly creative man, make no mistake. Entirely self-taught, he’s pioneered the technique of developing massive photos directly onto brick walls and big plates of glass. His new show ʻA Moment In An Instant Worldʼ, which is open ’til 24 March at the Shizaru Gallery, is the culmination of Hugoʼs focus and deep exploration of obscure photographic systems. Josh Jones asked him some inane questions.

Where did you get the idea for your photographic frescoes?
I was just curious whether you could physically make photographs on walls outside. I’m obsessed with making things to entrance or entertain the average person, so making something in a public space reaches a wider audience.

If you were locked in a garage with an assortment of bits, do you reckon you could fashion a camera together? Like a photographic A-Team?
One hundred and ten percent yes! Making cameras and experimenting with photographic techniques I could do till the cows come home. We may be making an A-Team-esque van into a camera in the near future. Stay posted.

Do you ever shoot yourself?
In the foot occasionally. I’m not too fond of having my own portrait taken.

What’s the worst part of the developing process for you?
The bit that my friends would probably enjoy the most; getting high off all the noxious chemical fumes.

What’s next on the horizon for you?
New York, LA, San Francisco, the Moon. Some great shows and commissions taking me off to foreign lands. Oh and I’m about to start working on a really interesting project, which is both sculptural and photographic, working further on the representation of the individual.