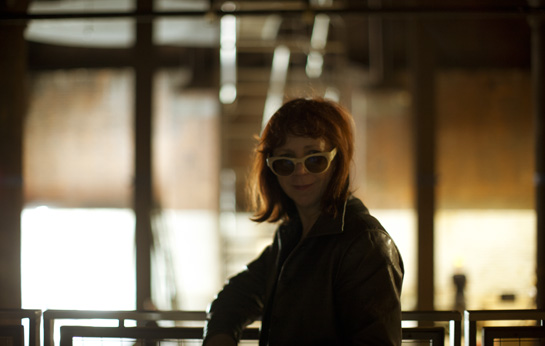 Jules Wright is the director of The Wapping Project – one of the city’s most exciting and interesting centres of art crossed with dining experiences. She also founded The Wapping Project Bankside and in between running between the two, she had a quick chat with Josh Jones about the upcoming Kris Ruhs exhibition ‘Landing On Earth’.

Can you tell us more about your latest exhibition at the Wapping Project?
Each year during London Design Festival, I try to commission and install something which is left field, outside the expected range of finely designed chairs, tables etc. This year I have invited Kris Ruhs – American born, but based in Milan and the creator of 10 Corso Como – to respond to the Boiler House at The Wapping Project… He is a magpie, working with disused and found materials – painting them, sculpting them, turning them into something which is redolent on the one hand of a bar in Marrakesh or Shanghai (he works regularly in both cities) but also of high fashion which is Corso Como. and Milan at the height of Fashion Week. The work consists of three major pieces – a labyrinth constructed of found rubber from Marrakesh, a metal and plastic curtain which has to be negotiated and an elegant chandelier made from many pieces of individually fired raku , internally lit by LED lights, with a shining stainless steel seat below that rolls around – Each piece is interactive, so there is a lot of fun to be had.

What’s your favourite part of it?
I like the chandelier a lot, but I also love the two simple paintings which became part of the exhibition at about 5pm yesterday.

How did you get into doing what you do?
I have been involved in the arts for a long time, straight out of university, as a theatre director principally, at some of the UK’s major theatres – Deputy Artistic Director of the Royal Court Theatre, Artistic Director of Liverpool Playhouse for example – but a point came in my life when I wanted to be answerable to no-one – and that is where Wapping and the Power Station came into being. I cannot imagine filling in an Arts Council form to explain Kris Ruhs and MY decision to commission his work for Wapping.

Is it true that The Wapping Project is one of the few places in London that’s impossible to find on a SatNav (I went for dinner there and the minicab driver got in a right state).
Is it? It’s on the knowledge. For all future visitors who can’t find Wapping, the postcode is E1W 3SG –
Did you know that the Tower of London is in Wapping?

I can tell you, I did not. What’s your favourite part about working there? Not many people get to wander about in an old hydraulic station.
I love it and I hate it, of course, just like all jobs and sometimes I do not want to work here at all. My favourite bit though, is walking in after I have spent a couple of days at my gallery in Bankside, early in the morning, and then the space sweeps me up and carries me away – its simple beauty and its proportion.