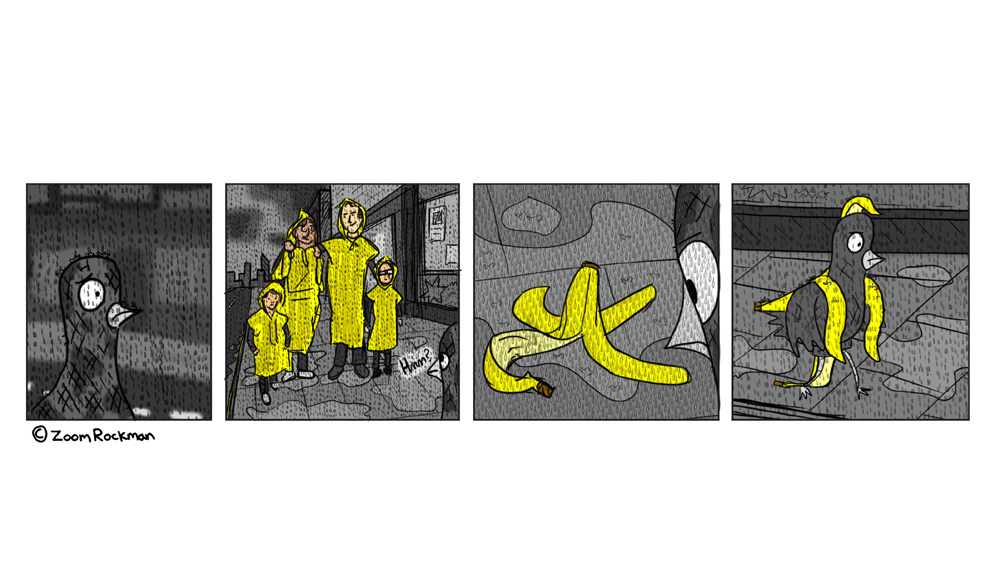 Zoom Rockman is a teenage wonder-cartoonist. Starting his own cartoon at the age of 8, he’s also a regular contributor to the legendary Beano and has a show at The Queens in Crouch End of his take on the local area.

Hey Zoom, how’s it going? Got a bit of an exhibition going on I hear…
Yes, it’s a show of my latest local artwork and also some of my comic strips that I’ve set in London.

You’re a busy a guy – you started your own comic when you were 8, have a regular page in the Beano and also have this show at The Queens. How do you make time for everything?
As I’ve got older the process I use for making comics has got a lot more complicated so it does take up a lot of time. My head teacher at school has been really supportive and from quite early on he let me drop a couple of subjects so I’d have space in my timetable to get on with what I need to do. Usually pencil rough layouts and inking in stories. Anything digital I do at home. This year has been more difficult because I’ve had my GCSEs but I was able to fit everything in by being really organised and doing as much as I could at weekends and in the school holidays.

How did the whole Beano thing happen – that must be a dream job for a young cartoon artist?
Yes it is. I was on a BBC TV programme about comics and the Editor of The Beano was interviewed for the same show. I didn’t actually meet him but after that he got in touch and asked if I’d like to be a contributor.

Do you want to eventually move into making Garth Ennis-style graphic novels?
Yes, that’s definitely something I’d like to do, but I’d also like to eventually be involved in film, TV and advertising.

Where can we see more of your work?
You can read all 11 issues of my comic for free on my website and my latest ‘Skanky Pigeon’ story is in The Beano this week. My show’s on until August 10 the at The Queens, which is 26, Broadway Parade, Crouch End, N8 9DE