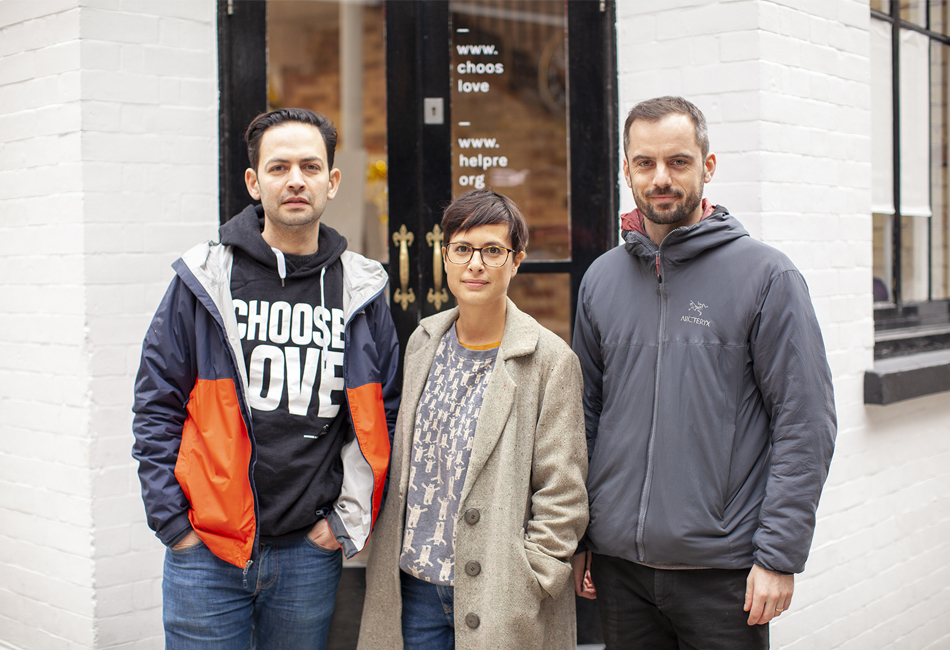 Zac Schwarz and James Turner are the people who came up with the absolutely fantastic Choose Love shop last year, where folks could buy actual, useful things for refugees. They’ve since been joined by Anella Wickenden and become a proper collective called Glimpse. The shop is back bigger and better this year, expanding to two cities (addresses below) and online and opens, of course, on Black Friday. We wanted to know more.

Hey Zac, Anella and James, how’s it going? Things getting a bit busy?
Crazy busy right now to say the least. We had a quiet spring and summer – lots of cake in coffee shops in the afternoon doing planning, then it all kicked off end of August and hasn’t stopped.

I think you can safely say your Choose Love refugee shop is back by popular demand – aren’t you opening up a second store in New York?
Last year was bonkers. Working with the amazing Help Refugees team, we pulled together the store in a matter of weeks, all with volunteers from the charity and our network and raised nearly £750,000! Yes, this year we’ve gone with a London store nearly four times bigger and our first store in New York. New York felt the natural progression for the concept and obviously a huge market to raise awareness of the issues and fundraise.

Where did the idea come from – it’s brilliant.
We wanted to imagine a world where you could enjoy the festivity and joy of giving at Christmas without that guilt of buying all that crap that nobody needs or wants and ends up in the bin. We thought wouldn’t it be great if you could shop for someone else that actually needs it. And we thought what better way to launch than on the most ridiculous shopping day of the year – Black Friday.

What new items do you have this year?
Along with the essentials like emergency blankets and hot food, we’re expanding the offer with a range of bundles that allow you to buy for people with specific needs such as Mother and Baby and Shelter bundle. We’ve also got new items such as a hot shower or a solar lamp. All basic items that we take for granted but can make such a massive difference to people in such need. A big part of last year’s success was giving visitors the chance to gift their purchase for someone so we’ve got slick new gift cards that make a wonderful Christmas gift!

And people can buy online again right? They don’t have to go to the store on Fouberts Place?
Definitely – the website was a huge part of our success last year so we’ve totally refreshed it and added a load of neat extras. The site will go live when the store opens on November 23rd and you can find it right here: www.choose.love

So wait one second, I heard you were also the guys who bought all the ad space at Clapham Common station and filled them with pictures of cats? Where do all these ideas come from? You don’t sound like your usual agency.
We are actually a collective now! What started off as an experiment with the CATS project and a bunch of mates has slowly morphed into where we are now.  We’re trying to add positive and creative flair to social and environmental causes. Instead of focusing on the problem, we start with a ‘glimpse’ of a better world, which feels aspirational and new and work back from there.
We run our own campaigns all staffed by volunteers, teach creativity training and work with a load of charities now such as Greenpeace, The RSPB and, of course, Help Refugees.