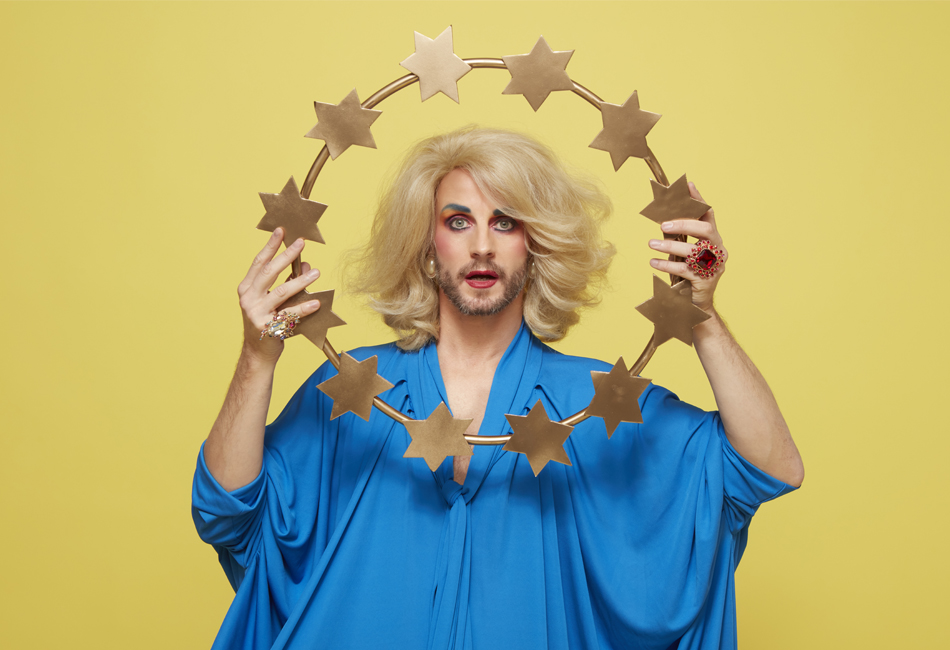 Jonny Woo is a true legend of London nightlife. Samuel Jonson famously said, “When a man is tired of a Jonny Woo night, he is tired of life” as he staggered out of The Glory one evening covered in glitter. Jonny’s bringing his one-night-only, All-Star Brexit Cabaret on 17th December to the home of the English National Opera, so we thought we’d see what it was all about.

Hey Jonny, how’s it going?
I’m good. Knee deep in sequins and tinsel for the festive season whilst still trying to keep one foot in the unreality of the Brexit pantomime.

So tell, tell tell us about your marvellous new Brexmas production…
I love that ‘Brexmas’. Ha ha, that’s going in the show. Well, I wrote the bulk of the show with the ever so naughty Richard Thomas of ‘Jerry Springer The Opera’ fame, in 2016 straight after the vote, so the bulk of the story is about what happened then. We took the show to Edinburgh where it was a hit. I thought people would be sick of Brexit, but it’s a subject we ALL have an opinion on so in terms of a show, it’s not like anyone is going to be like…whats this about? lol. My parents voted Leave and I’m Remain, so I do address both sides of the subject, it’s tricky writing from a standpoint which you don’t agree with, but a lot of it’s about how we treat each other. It’s a democracy and everyone is actually allowed to have a different opinion. But seriousness aside, the show is a HOOT! We are super happy with the songs, all 18 of them! I’ve got the BEST cast. The ensemble, Adam, Sooz and Kevin are, as Liza would say, just terrific, and the star turns as the much maligned Brexit celebs are all show stoppers. Gateau Chocolat as Nigel Farage literally holds a note which is longer than the Brexit negotiations itself. That’s worth getting a ticket for! Oh and I show my bum too.

What’s the message you want people to take home from it and put under their pillow?
Hmmm, is there a message? Does there have to be one? It’s satire. It’s laughing at our common experience. It’s listening to opinions in ways that haven’t been expressed before. I hope it’s food for thought really. Reminding us about what were the reasons for voting in or out in 2016. I do feel I have some kind of responsibility to sum up how the nation feels by the end of the show so we can share a moment of catharsis but we are deep in it really and I’m not sure thats possible. My final words and the song which brings us to where we are now won’t be finished until very close to the date as there is still a ton of stuff to happen in the glittery world of politics. What I’ve learnt from writing the show is actually sometimes it’s good to shut up and actually listen to other people even if you don’t agree with them – there is a lot to learn. I think it really is about how we move forwards as a society regardless of the outcome, which we won’t know until maybe next year.

Is it perhaps the bawdiest thing the English National Opera’s home has ever seen?
I doubt that very much and I actually hope not. It’s all about the music. There are some killer costumes and we sing the c word about 500 times. Sooz as Theresa May has some very choice words to sing on the matter, which will surprise, with a very catchy simple sing-a-long. Myra Dubois is making her operatic premiere as Britannia and is never one for holding back. So give her a mic and an auditorium that size and who knows what will happen.

I see you’ve got le cool favourite Jayde Adams playing Boris Johnson – how well does she take your direction?
She is an absolute dream. We love writing for her and she has got some killer top notes to sing out. Boris Johnson has never sounded so amazing. He is still a bell end!

Are you going anywhere nice for Christmas?
I’m seeing my folks in Brexit land just before Xmas, and they are coming up for the show so will be in one of the boxes. I think I’m spending Xmas in London actually and will be going for lunch in the West End. That’s a very tourist thing to do isn’t it? If all else fails I will lose myself in a tin of Quality Street and The Sound Of Music. How very British of me.

What’s your present opening routine on Christmas Day?
I don’t have any to open. I open them the night before. Why wait?

Jonny Woo’s All-Star Brexit Cabaret is on 17th December at the London Coliseum and you can get your tickets here.