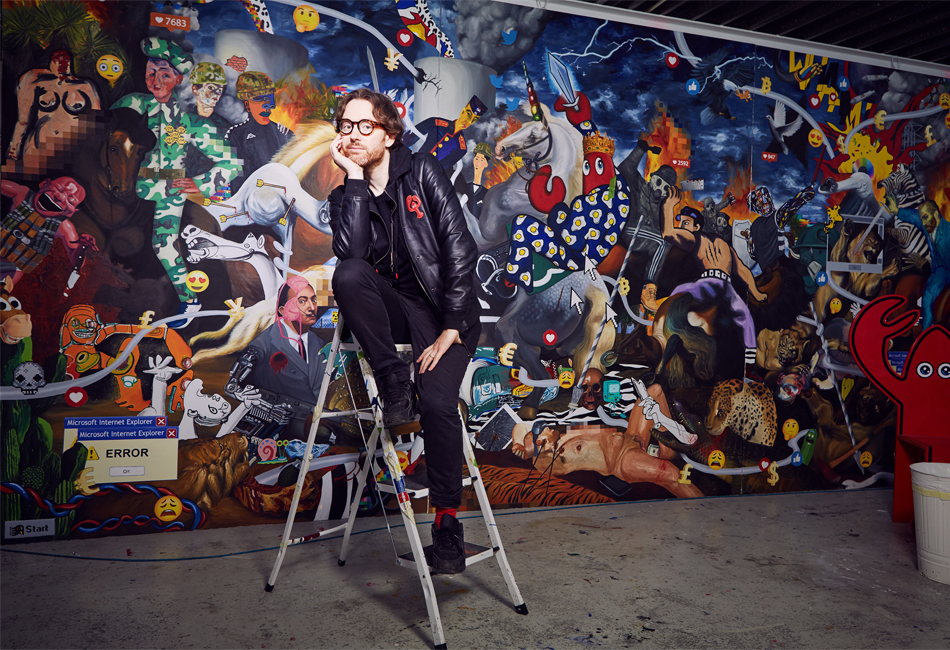 Philip Colbert is one of the UK’s most vital pop artists. This Saturday (15th Dec) he’s about to embark on his largest solo exhibition to date, featuring twenty-five works. Presented by Unit London and shown at Saatchi Gallery, ‘Hunt Paintings’ will see Philip exhibiting new pieces, including the large-scale Hunt Paintings and a series of monumental sculptures. The exhibition, curated by Sacha Craddock, will run across three galleries and include a virtual reality experience, as both Philip and Unit London are pioneering a change in the restrictions and elitism within the art world through new technologies. We thought we’d say hello.

Hey Philip, how’s it going?
Good to meet over emails, it’s been intense getting the works for the show together, but happy with how it’s all come together.

This is a massive show – how much of a headache is it trying to place your work in a way you’re satisfied with across three galleries?
It was challenge to curate, as spiriting up the works is often tricky, luckily the curator Sacha Craddock was super helpful advising me the best way of splitting them, we tried to keep the rhythm working between each picture but also with some surprises so the journey through the space stays interesting.

How did the lobster – who crops up in a lot of ‘Hunt Paintings’ -  manifest itself as your alter ego?
I had been drawing lobsters for years, and after I started wearing a suit with my lobster drawings on it I picked up the nickname of Lobster Man, so when I really started focusing on painting again, Lobster Man evolved onto the canvases. I love the symbolic freedom a persona creates, think of all the artists in history and the importance of their persona, such as Dali or Picasso, My cartoon Lobster character has really become the essence of my creative freedom.

You’ve been described as the ‘godson of Andy Warhol’ – what would you be expecting from him for Christmas if that was the case? My godfather used to get me a Cadbury’s selection pack, which is hard to beat to be honest…
That’s a funny question, once in a museum show in Ukraine, the press conference took the quote literally, and really thought I was the Godson of Andy Warhol and thought I was the sole heir to his estate. If this had been the case perhaps a signed one dollar bill, somehow I feel there would be a strong sense of irony with a Warhol gift.

How does your Masters in Philosophy expand your artistic process?
For me studying philosophy helped me define my perspective on things, and I think clarified my love of satire and creation. For me, art is a way of thinking, and I really believe that the power of art is freedom. Philosophy really helped me articulate that. What’s the largest scale you feel you could go with your work?
I am constantly trying to push that, as it’s key to the freedom of ones creative vision, at the moment I am building a world called LOBSTER LAND in VR where my Lobster character lives. I like the idea of eventually making Lobster land a real place.

Are there any brands you would never, ever include in your pieces?
Ones that aren’t common language or are too niche ideas, I like iconic images of everyday that connect with people across the world. Ideas that are common are more meaningful and valuable and touch more people.

Where can we see more of your work?
I have a series of shows in Asia next year, alternatively pop by my east end studio, or visit LOBSTER LAND VR next year via my website.