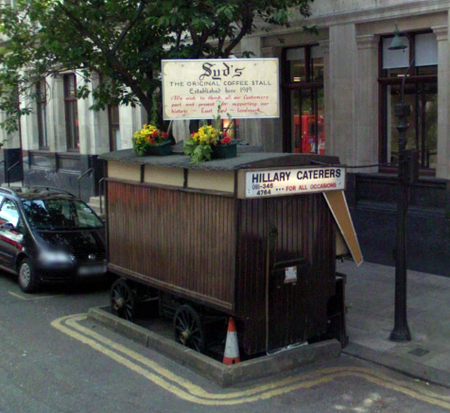 This is London’s oldest coffee stall – Syd’s. Bought in 1919 by Syd Tothill with his invalidity pension from the first world war, Syd’s has been serving up coffees to Londoners from Prince Edward to wartime ARP wardens for nearly a century. Indeed, Syd’s was adjudged so important to morale in the East End during World War Two that when a direct bomb hit on Calvert Avenue left Syd unable to run the stall his son, Syd Junior, was brought home from his RAF posting in the Middle East to make sure ambulance crews and Air Wardens didn’t go thirsty. Now run by Syd’s granddaughter Clarrie, what the Evening Telegraph said in 1959 about Syd’s is as true today as then; “Ev’rybody knows Syd’s. Git a bus dahn Shoreditch Church and you can’t miss it. Sticks aht like a sixpence in a sweep’s ear.”